What you need to know before stacking Sarms. Find out what the best combinations of Sarms for: bulking, cutting, losing weight, powerlifting, bodybuilding, and more.

This is your powerful guide to accomplish your goals by stacking Sarms for maximum results. Whatever your physical goals are, Sarms can help you achieve them quickly, healthily, and without terrible side effects. Click here to build your custom Sarms Stack.

There are two very popular Sarm Stacks for Women: 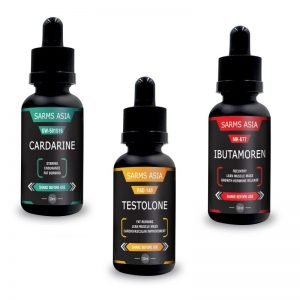 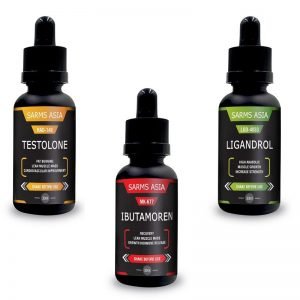 As we discovered in our other places on this website, LGD-4033 is a fantastic SARM for building muscle, so that is a must in our muscle-building stack. Along with that, MK-677 is a solid addition

An alternative to MK-677 would be RAD-140 (Testolone). The great thing about this SARM is that it produces similar strength and muscle adaptations as testosterone supplementation, but without the common androgenic side effects such as:

But putting all 3 of these SARMS together would make for the ultimate bulking stack.

One last alternative stack would be YK-11 and RAD-140. YK-11 is a myostatin inhibitor. Myostatin is an enzyme that inhibits the growth of muscle past a certain point. This is where most people reach their “genetic potential”. If we can inhibit this enzyme, then the more potential for muscle growth we have.

Just as with women, combining S4 (Andarine) and GW501516 (Cardarine) would be your best bet. Cardarine would be your primary fat burning compound while S4 would be the SARM most responsible for muscle growth. This is vital during times of calorie restriction. The added touch that S4 has is its effects on vascularity, being able to increase it quite significantly.

Combining LGD-4033, YK-11, and S4 together not only makes for a great bulking stack, but makes for an even better stack for those whose primary goal is sheer strength!

Consider adding MK-677 will also really help with recovery, as the increase HGH will help those joints and tendons recover from the pounding of the high-intensity training.

So as you can see, there are many possibilities with SARMS and all of the different ways that you can stack them. Whatever goal you have, SARMS can help you to achieve them!

The great thing about SARMS is that they are more easily tolerated by women as opposed to steroids. Not only that, but women often see great effects (almost steroid-like benefits) from SARMS, but without the nasty side effects associated with steroid use. Because of this, women often don’t even have to stack them together, as often enough, one is all they need to accomplish their goals.

However, there are some out there who are looking for more. Those that are more experienced, such as bodybuilding and figure competitors who have been doing this for many years, may require more advanced stacks in order to achieve their goals. Fortunately, stacking multiple SARMS together will often achieve their desired outcomes.

In a previous areas on this website, we discussed that the most well-tolerated SARMS for women were LGD-4033 (Ligandrol) and S4 (Andarine).

Ligandrol LGD-4033 is going to be best for women who are trying to add size, most likely those in the figure or physique divisions.

On the other side of the spectrum, Andarine S4 would be best suited for women who are looking to cut down, such as preparing for a competition or those who in a division that require a smaller frame, such as the women’s bikini division. The added benefit of this SARM is that it really helps in retaining muscle mass during intense calorie restriction, which can really come in handy during contest prep.

The dosing for these is quite simple.

For Ligandrol, 5 mg every other day is sufficient is most cases. But for the more advanced trainee, using that same dose every day will work.

As for S4, between 5-15 mg every other day is sufficient. Again, the more advanced trainee can switch to using it every day.

Recomposition is a phase in which your goal is to simultaneously build muscle and lose fat. This is where stacking both Ligandrol and Andarine comes into play. The Ligandrol is going to help in the muscle-building process while the Andarine will help burn fat and also aid the Ligandrol with its job.

If one really wants to step it up a notch, adding MK-677 into the mix will really help with a recomposition phase. It helps to increase nitrogen retention, which will help out the previous two SARMS. And not only that, it has been shown to improve sleep quality. This will lead to enhanced recovery, which allows the female to train more often and perform more work in less time.

Build Your Own Sarms Stack